The Office of the U.S. Trade Representative Holds 2013 Awards Ceremony

Today, Ambassador Froman hosted the 2013 Awards Ceremony for the Office of the United States Trade Representative (USTR). Held in the Eisenhower Executive Office Building, the event recognizes outstanding performance among USTR staff, including individuals and teams, within six award categories. The annual Awards Ceremony allows the United States Trade Representative to recognize the tireless and significant contributions of its outstanding members and teams, continuing a tradition of excellence and progress in international trade. 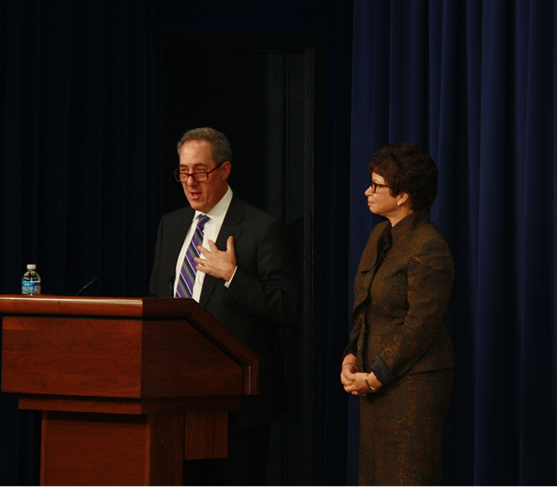 Ambassador Froman introduces Valerie Jarrett, Senior Advisor to the President of the United States, who delivered a keynote address before the ceremony

In recognition of those who exceed their job’s requirements for the benefit of a colleague or a mission, USTR introduced the Way to Go Award this year. 2013 recipients include Cecilia Klein from the World Trade Organization (WTO) and Multilateral Affairs Office, Sonia Franceski from the Office of Europe and the Middle East, Ed Brzytwa in the Office of Japan, Korea, and APEC Affairs, and Gwendolyn Diggs from the General Counsel, Monitoring and Enforcement Office. 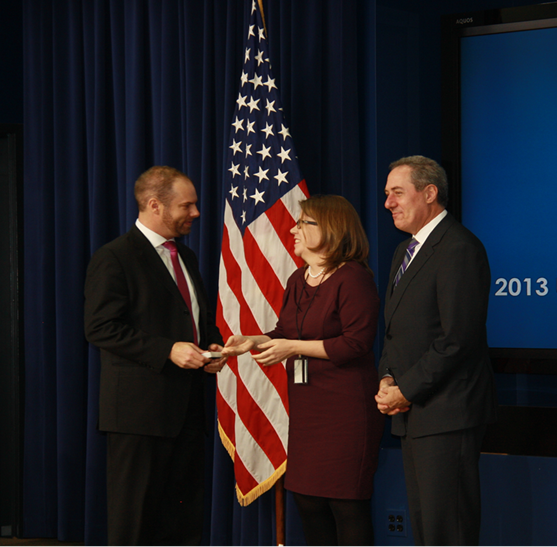 The Distinguished Career Service Award, an honorary award granted by the U.S. Trade Representative to employees who retire and whose career reflects long and exceptional devotion to duty, was granted to David P. Shark, the Deputy Chief of Mission in Geneva, and Patrick D. Coleman, from the Office of African Affairs, for their significant contributions to USTR as experts in their fields.

The Excellence in Service Award is granted to individuals who have made an extraordinary contribution in an administrative services and mission support position.  This includes individuals who have made an extraordinary contribution to a major project or taskforce that contributed to the efficiency of mission support. This year’s three recipients were Brian P. Cochran from the Facilities Office, Rhonda Davis from the Finance and Budget Office, and Lia Theodosiou-Pisanelli from the Office of Southeast Asia and the Pacific. 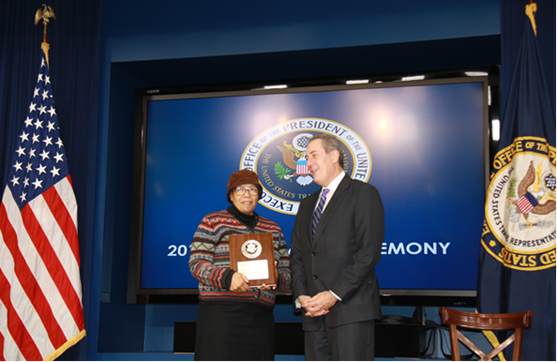 The Linda Enoch Award was named for an outstanding administrative support employee who served the USTR for several years, and recognizes the dedicated service of support staff who exemplify her professionalism, initiative, creativity, and respect from peers and superiors. Recipients included Shelia Givens from the Office of Congressional Affairs, Rhonda Lindsay from the Services and Investment Office, and Rosa M. Waddy for the Office of Japan, Korea and APEC Affairs. 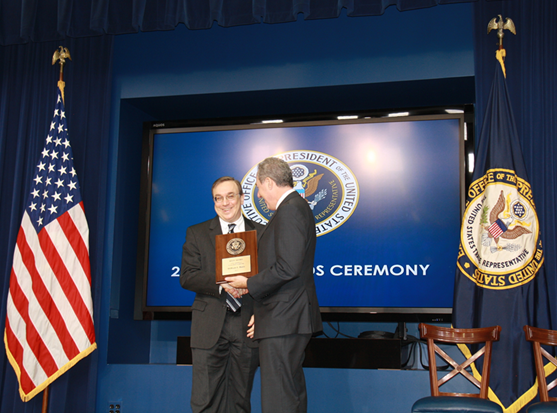 Lastly, Ambassador Froman presented the Kelly Award. Established in 1980, the Kelly Award recognizes USTR staff who embody the personal qualities of leadership, strength of character, compassion, and warmth of the award’s namesake, William B. Kelly. In addition, recipients must exhibit an exacting set of high qualities and characteristics, which include professional excellence, extraordinary and sustained contributions to USTR’s goals, leadership, initiative and creativity, and great respect from peers. The four recipients of this distinguished award are Michael L. Beeman from the Office of Japan, Korea and APEC Affairs, Bill Busis in the Office of Monitoring and Enforcement, Probir Mehta from the Office of Intellectual Property and Innovation, and Arun Venkataraman from the Office of Central and South Asian Affairs.