Below is a series of recent polls that demonstrate public support across the country for President Obama’s high-standard trade agenda.

Reuters, 5/27/2015: “A majority of Americans support new trade deals, a Reuters/Ipsos poll showed on Wednesday, even as President Barack Obama struggles to win support for legislation key to sealing a signature Pacific Rim trade agreement….The Reuters/Ipsos poll, conducted May 21-27, found that 56 percent of Americans support new trade deals to promote the sale of U.S. goods overseas, with just 13 percent opposed. Thirty-one percent were undecided. Respondents were not specifically asked about fast-track legislation or the TPP but instead were broadly asked about their views on international agreements. The result is similar to support in January after President Barack Obama pushed his trade agenda in his annual State of the Union address to Congress. That agenda also includes an ambitious deal with Europe.

Pew Research Center, 5/27/2015: “Overall, 58% of Americans say that free trade agreements between the U.S. and other countries have generally been a good thing for the U.S., while 33% say they have been a bad thing. These views are little changed over the last year, but are more positive than in 2011 (when 48% said they were a good thing).”

Wall Street Journal, 5/4/2015: “Americans’ views of free trade have  improved from the low levels following the recession, according to a new Wall Street Journal/NBC poll, suggesting a more favorable climate for a push by President Barack Obama and Republicans to pass new trade legislation. Just 37% of adults polled last month said that free trade with foreign countries had helped the U.S., compared with 31% who said free trade had hurt. But that is a turning point: it marks the first time in more than 15 years that a plurality of Americans said that free trade helped. The last time Americans had more positive than negative views of trade was in December 1999, when 39% of respondents said that free trade agreements benefited the country and 30% who said the deals hurt.”

Progressive Coalition for American Jobs, 4/30/2015: “A nationwide poll of Democrats released today by the Progressive Coalition for American Jobs shows overwhelming support for President Obama’s trade agenda. The poll, which surveyed likely voters across the country, found that 89% of respondents believe it is important for the United States economy that American companies sell products to other countries, and that Democrats trust President Obama over Congress to represent their values in trade negotiations by a wide margin – 64% to 24%.”

Gallup, 3/9/2015: “As they have for the past two years, a majority of Americans (58%) continue to view foreign trade as an opportunity for economic growth through increased U.S. exports, while 33% view it as a threat to the economy from foreign imports. The third of Americans who see foreign trade as a threat is on the low side of what Gallup has measured in the past two decades. The greater optimism on trade from 2013 to 2015 comes after a stretch of skepticism between 2005 and 2012.” 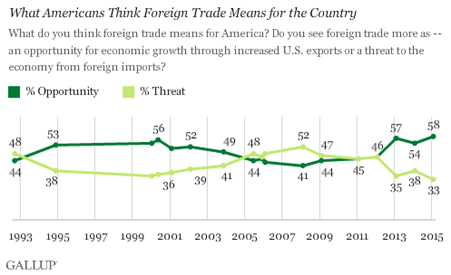