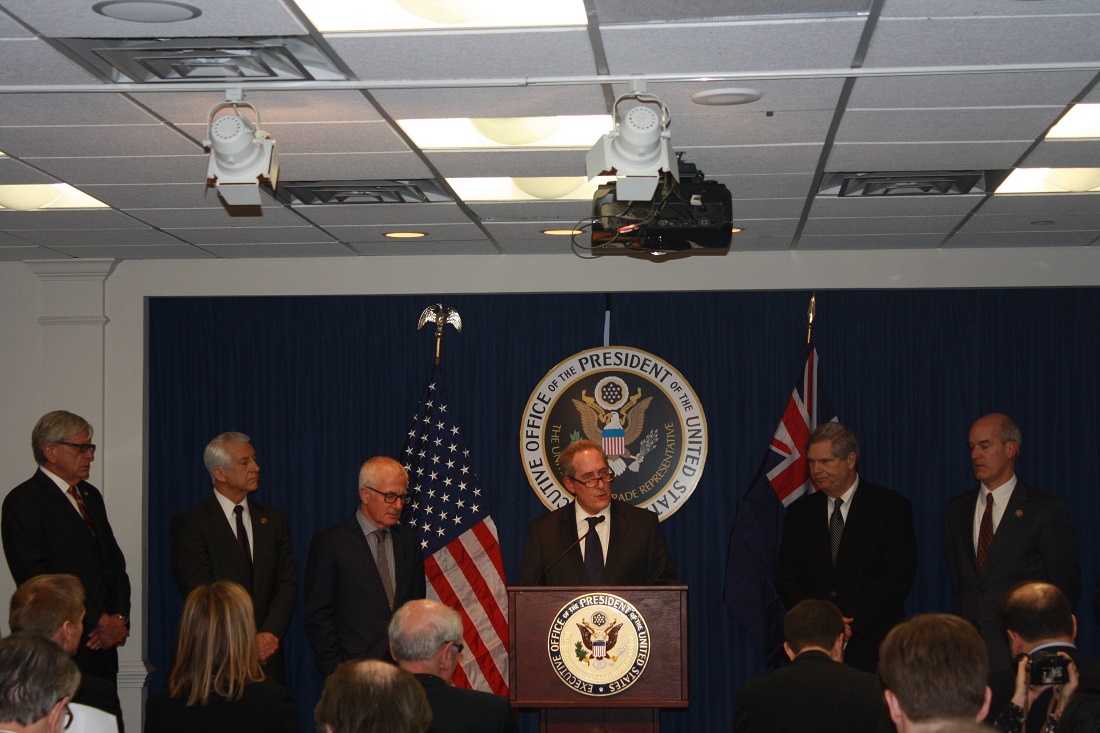 “American-grown agriculture exports are tremendously beneficial to the economy of America’s heartland. That’s one of the chief reasons that President Obama’s historic trade agenda is a major component of his Middle Class Economics strategy. I’m proud to take this action today standing up on behalf of farmers and ranchers across the United States who have been shouldering unfair export barriers to the fourth largest country in the world, Indonesia. This announcement comes at a time when the Obama Administration is fighting to unlock other economic opportunities for American agricultural exporters across the Asia-Pacific region through the Trans-Pacific Partnership.”

United States Trade Representative Michael Froman announced this week that the United States has requested the World Trade Organization (WTO) to establish a dispute settlement panel to examine Indonesia’s wide-ranging import restrictions on fruits and vegetables, animal products, and other agricultural products.  These measures include a ban on poultry and certain meat products and Indonesia’s trade-restrictive import licensing regimes for horticultural products and animals and animal products.  Indonesia’s prohibitions and restrictions have unfairly limited opportunities for U.S. farmers and ranchers to export their world-class products to Indonesia’s large and growing market. In 2014, the United States exported a record-high $155.1 billion of agricultural exports to the world, supporting over a million American jobs. This is the latest in a series of significant actions taken by the Obama Administration to help increase Made-in-America exports, protect the trade rights of American farmers and ranchers, and level the playing field for American workers worldwide.

Below are reactions to this week’s announcement:

Secretary of Agriculture Tom Vilsack: “USDA welcomes this next step in the WTO dispute settlement process. USTR and USDA have worked over the past two years to hold Indonesia to its trade commitments. America’s farmers and ranchers are among the most productive in the world, but they need a level playing field.  When our trading partners don’t play by the rules it costs American jobs, so it is critical we hold them accountable.” [Secretary Vilsack, 3/18/2015]

Representative Rick Larsen (WA-2): “The implications of Indonesia’s trade regulations are particularly relevant for Washington State, because my state is one of the top exporters of horticultural products, including apples, to Indonesia. This barrier to a critical market has created a guessing game about what Indonesia’s future needs will be, leading to major uncertainty for our farmers. I am pleased USTR has taken action to hold our trading partners accountable.” [Representative Rick Larsen, 3/18/2015]

Representative Dave Reichert (WA-8):  “By limiting access to an important market for Washington’s apples and pears, Indonesia’s trade restricting actions have harmed Washington’s thriving agricultural sector which supports communities across the state. I applaud Ambassador Froman for his commitment to challenging these barriers, so that our specialty crop producers can reliably access a top market.” [Representative Dave Reichert, 3/18/2015]

Representative Kurt Schrader (OR-05):  “It is imperative to my constituents and I that we see strong enforcement of U.S. trade agreements to give us confidence that these provisions will protect American workers and businesses. The unfair trade restrictions being imposed by Indonesia are hurting America’s producers and it’s critical that the USTR continue to take the enforcement actions necessary to maintain a level playing field for U.S. small businesses, especially our farmers and ranchers. Our small business owners need the ability to export their high-quality products, free of prohibitive limitations and I hope this measure will prevent further economic growth from being stifled.” [Representative Kurt Schrader, 3/18/2015]

Representative Brad Ashford (NE-2): “Nebraska is one of the top exporters of agricultural products – especially beef – and access to foreign markets is a critical component of the economy. Increasing open access to these foreign markets for U.S. goods means more jobs at home, and allows our producers to be more competitive in the global marketplace.  I support Ambassador Froman and Secretary Vilsack in taking this action, and working to provide a more level playing field for U.S. goods abroad.” [Representative Brad Ashford, 3/18/2015]

Senator Chris Coons (D-DE): “The economic health of America’s agricultural sector is directly tied to its access to foreign markets. That makes it critical that the United States fight the unfair protectionist policies of some of the world’s biggest markets. Indonesia is the fourth largest country in the world, and its ban on the import of U.S. poultry is both unwarranted and — it seems — illegal. If Indonesia wants the trade protections afforded by the WTO, it needs to itself live up to the standards enforced by the WTO. Ambassador Froman is continuing what has been an aggressive and appreciated effort by the Obama Administration to level the playing field for American farmers, and protect the jobs they support.” [Senator Chris Coons, 3/18/2015]

Senator Tom Carper (D-DE): “I thank Ambassador Froman for standing up for American farmers today. Indonesia is the world’s fourth largest country and a critically important market for American and Delawarean farmers to access. In 2014, it was one of the top 15 countries for exports from the First State and I am confident it has the potential to be even higher on that list. In Delaware, international trade supports 120,000 jobs and billions of dollars in exports to 187 countries around the world. No business in Delaware feels the impact of our trade policy more than our farmers, and our chicken farmers especially. The chickens we raise in Delaware, and on the rest of the Delmarva Peninsula, are a huge economic driver for our communities – creating more than $4.5 billion per year of direct economic activity.  Exporting more chickens around the world means farmers in the First State, both those who sell chickens and those who are part of the larger supply chain, could see more revenues and, in turn, create more jobs.  However, far too often we find countries imposing barriers for U.S. poultry exports. As we continue to pursue opportunities to encourage trade around the world, we must also be vigilant in ensuring that our trade partners uphold the rules and regulations of our trade agreements so we can ensure that American goods and services can compete on a level playing field. The Office of the U.S. Trade Representative has been successful in pursuing several cases with the World Trade Organization where our trading partners weren’t holding up their end of our trade agreements and were unfairly blocking U.S. products, including one in which China was found to be imposing excessive import duties on U.S. chicken broiler parts. As we look to strengthen current trade agreements, and negotiate new ones, we must ensure that we have strong enforcement tools in place to protect our businesses and workers’ ability to compete in a fair market.” [Senator Tom Carper, 3/18/2015]

Senate Finance Committee Ranking Member Ron Wyden (D-OR): “Strong enforcement of trade agreements is critical to ensuring that other countries play by the rules and that American workers, farmers and ranchers are given a fair shake at capturing new export opportunities overseas. Indonesia’s elaborate restrictions on imports have left American farm products, including Oregon fruits and vegetables, tied up in red tape at the border.  I am pleased that USTR is taking this step to fight for American farmers and ranchers and cut through the continually shifting schemes that have been holding up our products and creating needless market uncertainty.” [Senate Finance Committee, 3/18/2015]