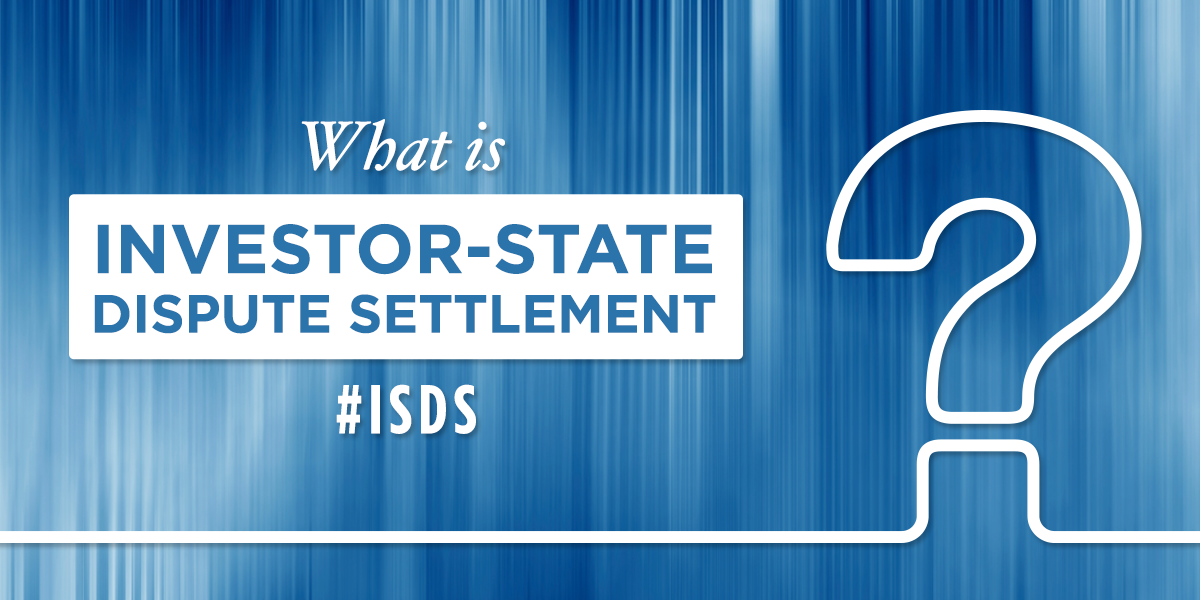 What is Investor-State Dispute Settlement (ISDS)?

U.S. trade agreements help American entrepreneurs and businesses large and small to find new opportunities in growing overseas markets.  For example, if an American family wants to build a small business in a TPP country, the Trans-Pacific Partnership agreement can help make that possible.

That’s where investor-State dispute settlement (ISDS) comes in.  ISDS is included in our trade agreements to provide a neutral and impartial process to resolve conflicts between countries and foreign investors.  Governments include ISDS in trade agreements for at least three reasons:

3.       To signal to potential investors that the rule of law will be respected

Under the Trans-Pacific Partnership, ISDS is specifically designed to protect American investors abroad from discrimination and denial of justice.

Where did ISDS come from?

Before we had investment rules and ISDS international agreements, unlawful behavior by countries that targeted foreign investors tended either to go unaddressed or escalate into conflict between countries. In fact, early in our history, the U.S. had to deploy “gunboat diplomacy,” or military intervention, to protect private American commercial interests.  ISDS is a more peaceful, better way to resolve trade conflicts between countries. In addition, ISDS strengthens and promotes the rule of law by creating incentives for governments to follow basic due process and rights that are recognized around the world.

What rights are protected by ISDS under U.S. agreements?

The rules enforceable through ISDS provide Americans who decide to invest in foreign countries with basic protections from foreign government actions, including:

Can corporations use ISDS to initiate a dispute settlement proceeding solely because they lost profits?

No.  Our investment rules do not guarantee firms a right to future profits or to expected investment outcomes.  Rather, they only provide protections for a limited and clearly specified set of rights.  For instance, if a country decides to take away the property of a business without any compensation, that business can seek compensation through a neutral arbitration.  Like U.S. law, the goal of impartial arbitration is to promote fairness, not to protect profit.

Won’t ISDS give corporations the right to challenge our laws, or weaken our labor and environmental standards?

No.  ISDS arbitration is extremely limited in its scope.  It cannot make any country to change its laws, and the protections it affords investors are comparable to protections already available to U.S. and foreign investors alike under U.S. law and practice.  By contrast, domestic courts are much more powerful.  They can order compensation, award punitive damages, or strike down whole laws.  ISDS does nothing that takes away the sovereign ability of governments impose any measure they wish to protect labor rights, the environment, or other issues of public welfare.

But what about the cost?  Have American taxpayers been required to pay millions or billions of dollars in damages because of an ISDS decision?

How does the ISDS process ensure that arbitration is unbiased?

Governments play a central role in determining the composition of who handles arbitration.  In the case of the United States, we have won 100 percent of cases against us, suggesting our confidence in the process is not misplaced.  In addition to the role governments play in selecting arbitrators, they can also take steps to disqualify arbitrators who do not meet standards of impartiality and independence.  There is a Code of Conduct for arbitrators as well as impartiality provisions governing arbitration.

No.  Most ISDS cases are brought by individuals or small businesses, investors that often have much fewer resources than large multinational corporations and are thus more easily discriminated against or mistreated.

Does ISDS shift power away from American courts?

No.  American courts handle the vast majority of cases brought by individuals, corporations, and foreign investors against the U.S. government – hundreds of thousands of cases over the last decade.  Critics like to argue that ISDS stacks the deck in favor of investors.  The evidence suggests otherwise.  Very few investors have sought to challenge the United States through ISDS arbitration rather than through domestic courts.  And when they have sought ISDS arbitration, they have lost in every single case that has been decided.

If an American investor runs into a problem with a foreign government, he or she could face an unfair bias in that country’s court system.  That is what makes impartial arbitration so important.  ISDS can be crucial for small and medium-sized enterprises, which often lack the resources or expertise to navigate foreign legal systems and seek redress for injury at the hands of a foreign government.  That’s why small businesses and individuals have accounted for about half of all cases brought before international arbitration.

Why do people question the ISDS provision in the President’s trade deal?

There are good questions, and there are good answers.  The Director of the National Economic Council Jeff Zients responded to these and other concerns directly.  You can read that response here: https://www.whitehouse.gov/blog/2015/02/26/investor-state-dispute-settlement-isds-questions-and-answers