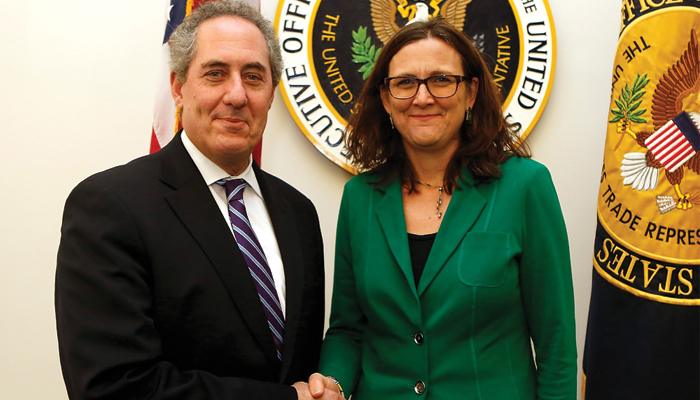 Ambassador Michael Froman: “We just finished a very good set of discussions where we reviewed the state of the negotiations to date. We reaffirmed our commitment to an ambitious, comprehensive, high standard T-TIP. We talked about next steps in terms of equipping our teams with the tools they need to move forward on the outstanding issues. We expect that the meetings over the course of January among various parts of our team, as they prepare for a round in early February, the next formal negotiating round. And the two of us, very much are committed to staying actively involved through regular stock-taking exercises throughout the negotiations.”

Commissioner Cecilia Malmstrom: “Well I am obviously very happy to be here today. It’s the first real meeting between us, Mike, and his team on an agreement that we consider on the European side, and I know that is shared, being a potentially very, very important agreement. Not only because what it can bring when it comes to jobs and growth, on both sides of the Atlantic, but also the possibilities for us to set global standards and to renew and to reconfirm our strong partnership across the Atlantic as well.

“This was a very good meeting, we went through everything, we exchanged new ideas, informally, but very useful to take stock of where we are, possible ways forward, and so on. And I would personally be very engaged with Mike to follow this, to give it the political push necessary to do, as was recommended by our leaders in Brisbane. This is a priority for both President Obama and European leaders, and we do this between us, but also underlining the importance of trying to engage with the stakeholders outside as well to try to explain and demystify some elements of this potentially very, very important agreement.”