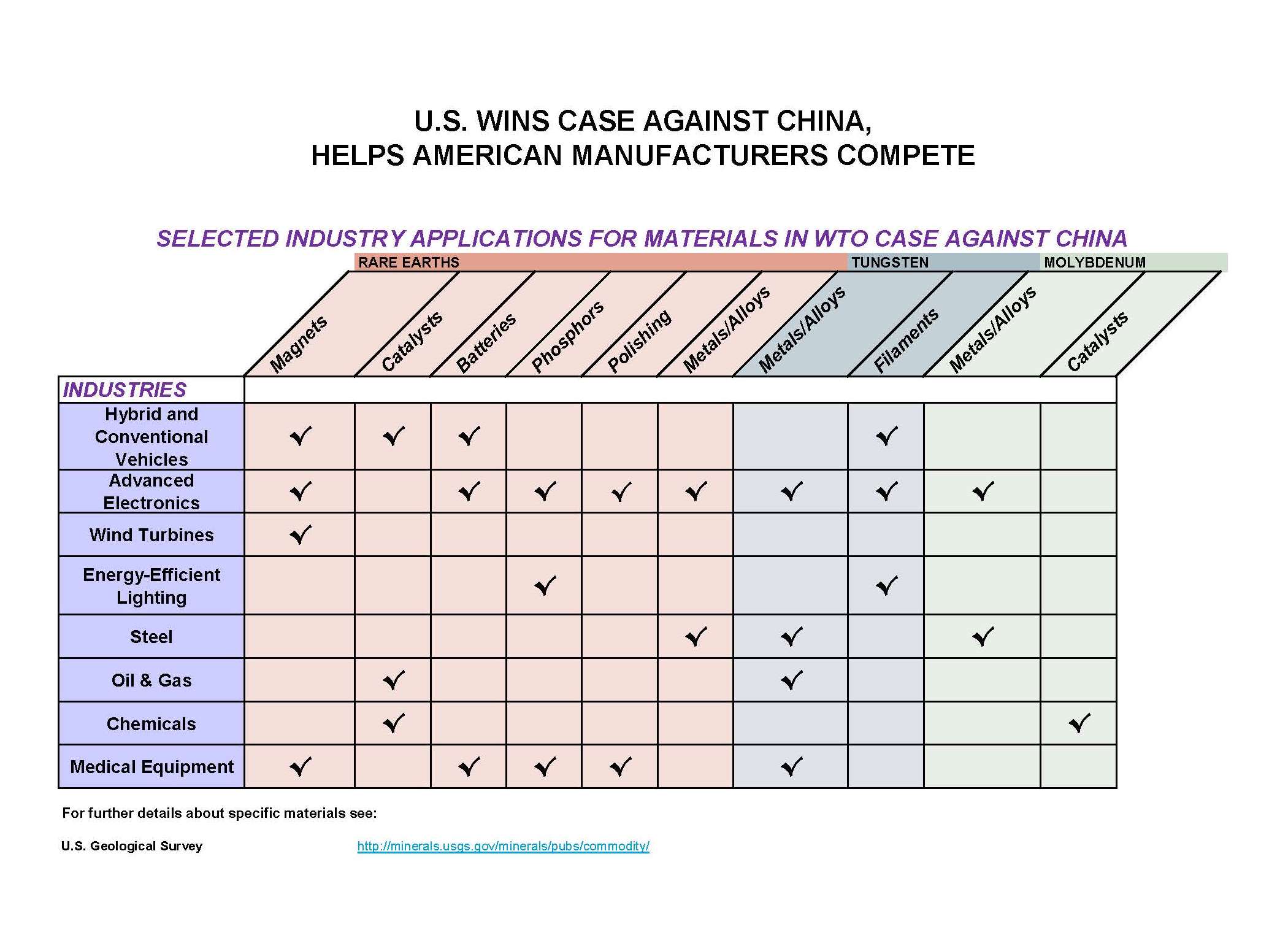 “Time and again, the Obama Administration has made clear that we are willing to go to the mat for American workers and businesses to make sure that the playing field is fair and level,” said Ambassador Froman. “The United States is committed to ensuring that our trading partners are playing by the rules.  We will continue to defend American manufacturers and workers, especially when it comes to leveling the playing field and ensuring that American manufacturers can get the materials they need at a fair market price.”

“China’s decision to promote its own industry and discriminate against U.S. companies has caused U.S. manufacturers to pay as much as three times more than what their Chinese competitors pay for the exact same rare earths.  WTO rules prohibit this kind of discriminatory export restraint and this win today, along with our win 2 years ago in an earlier case, demonstrates that clearly.”

“We hope this will discourage further breaches of WTO rules that hurt American manufacturers.  This victory shows that we stand prepared to take action whenever necessary to protect the high-quality middle class American jobs that trade supports.”

The Chinese export restraints challenged in this dispute include export duties and export quotas, as well as related export quota administration requirements.  These types of export restraints can skew the playing field against the United States and other countries in the production and export of downstream products.  They can artificially increase world prices for these raw material inputs while artificially lowering prices for Chinese producers.  This enables China’s domestic downstream producers to produce lower-priced products from the raw materials and thereby creates significant advantages for China’s producers when competing against U.S. and other producers both in China’s market and other countries’ markets.  The export restraints can also create substantial pressure on foreign downstream producers to move their operations, jobs and technologies to China.

The United States initiated this WTO dispute in 2012, in cooperation with the European Union (EU) and Japan, after China drastically reduced its export quotas for rare earths and caused a spike in world prices and considerable disruption to the global rare earths market.  This dispute builds on and expands an earlier victory that the United States achieved in 2011 challenging China’s use of export  restraints on a different set of raw material inputs used in the steel, aluminum, and chemicals industries (bauxite, coke, fluorspar, magnesium, manganese, silicon carbide, silicon metal, yellow phosphorous and zinc).

The panel found that the export duties and quotas that China maintains on various forms of rare earths, tungsten and molybdenum constitute a breach of WTO rules and that China failed to justify those measures as legitimate conservation or environmental protection measures. The panel also found that China’s export quota administration requirements are inconsistent with WTO rules.

Under WTO rules, the panel report may be adopted or appealed within 60 days of its circulation.