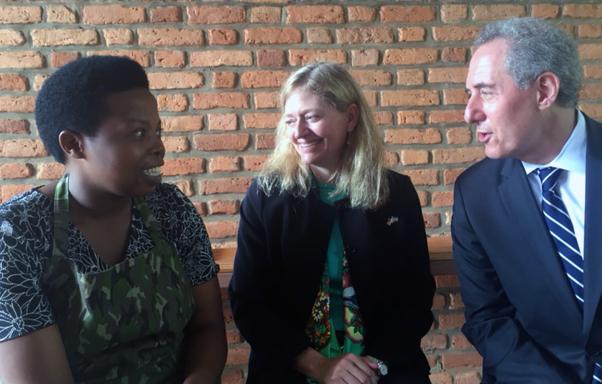 During a few months in 1994, 800,000 Rwandan men, women and children were killed.  The population that was left was 70 percent female, leaving it largely to women to take on the work of rebuilding the devastated country.  One of those women, and a hero of Rwanda’s rebuilding, was Aloisea Inyumba. As minister of Social Affairs, Inyumba argued that the shared experience of overcoming economic hardship was a healing agent.  “We are using poverty as a concept of reconciliation,” she said. "Together, we can put up a house, build a new country, and ensure that nothing like the genocide happens ever again.” 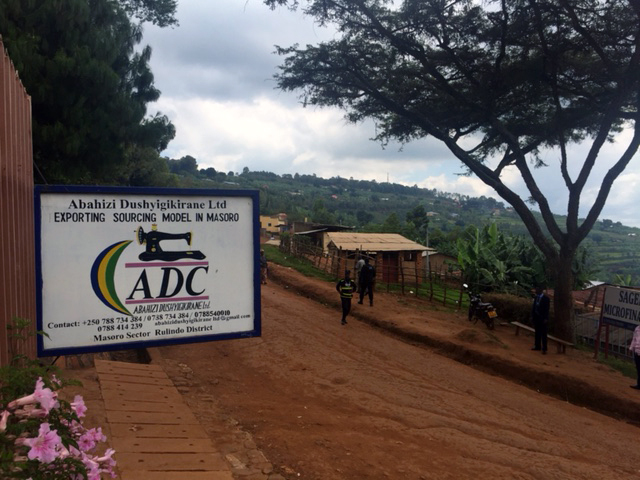 The Masoro facility of Abahizi Dushygikirane, Ltd. (or “ADC”) is a reminder of the distance Rwanda has travelled in the last two decades and the tremendous role its women are playing in its transformation.  ADC is a Rwandan, women-owned cooperative of over 170 artisans producing high-end handbags and accessories for Kate Spade & Company.  Their products can be found in stores around the United States, Europe and Asia as well as online.  In the United States, ADC’s products come in under the African Growth and Opportunity Act (AGOA), our central trade policy tool for sub-Saharan Africa, which provides duty-free access into the U.S. market for nearly all goods produced in sub-Saharan African countries.  In so doing, AGOA also makes the United States a partner in Africa’s pursuit of prosperity.

Established as part of Kate Spade’s “On Purpose” trade initiative, which seeks to integrate for-profit, artisanal operations into Kate Spade’s global supply chain, ADC has been developed to meet the same quality and standards as Kate Spade’s other international suppliers.  This is aimed at making ADC internationally competitive so it can supply not only Kate Spade but, over time, other buyers in the global marketplace as well.

For small businesses like this company nestled in Rwanda’s thousand hills, the opportunities provided through trade are vital.  Each woman at ADC supports, on average, an additional four people with her income.  The jobs at ADC help pay for schooling – like for Alphonsine, one of the women I met who is studying accounting – and improvements to their homes.  The income has allowed some of the women to establish side businesses that, in turn, employ other people in Masoro.  In many ways, the entire community comes to depend on these jobs and, in turn, on trade.  As Rwanda’s President, Paul Kagame, puts it: “trade has always been the single most important thing to enable transformation to take place here in Rwanda; it creates entrepreneurship, self-reliance, rather than people always waiting for someone to help them out.” 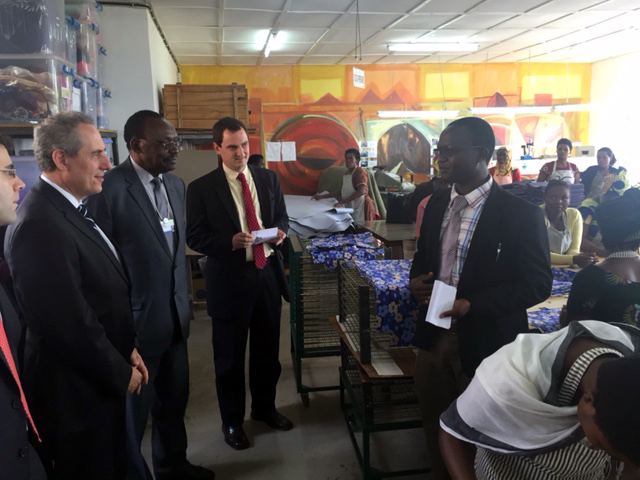 For ADC and other small companies in Africa, however, the challenges for integrating into the global market are also significant and more difficult to overcome than for larger companies.  According to the World Bank, for example, sub-Saharan Africa continues to lag the rest of the world on virtually every measure of the ease of cross-border trade (although Rwanda has made some important strides in this respect).  Challenges persist in terms of access to energy and basic supportive services, like banking and credit, and many countries face significant difficulties with fundamental “enabling environment” issues, including protections for investment, intellectual property, workers and the environment.

Innovative trade policies can help to boost the opportunities and diminish the challenges to trade.  In 2015, for example, under the Trade Africa initiative, we concluded a cooperation agreement with the East African Community (EAC) – the regional economic bloc of which Rwanda is a leading part.  Part of this agreement includes commitments by the EAC to implement trade facilitation reforms, which will ease customs burdens of import and export into the region, as well as commitments by the United States to support this effort through technical assistance.

Now, we are turning our sights to new trade policy options for sub-Saharan Africa, looking beyond the era of temporary tariff-only unilateral approaches that have defined our relationship for the last 16 years to see whether more comprehensive, permanent and mutually beneficial trade arrangements are desirable and possible.  In so doing, the lessons of Rwanda – and the work that the women are doing here to pull themselves, their communities, and their country out of the shadows of the genocide – will not be far from our minds.