Washington, D.C. – United States Trade Representative Michael Froman announced today that the World Trade Organization (WTO) Appellate Body has agreed with a previous panel report, handing the United States a major victory in a dispute challenging India’s ban on various U.S. agricultural products.  India’s ban on products such as poultry meat, eggs, and live pigs was allegedly maintained to protect India against avian influenza.  The WTO panel and Appellate Body overwhelmingly agreed with U.S. claims that, for example, India’s ban is not based on international standards or a risk assessment, India discriminates against U.S. products in favor of Indian products, India’s measures are more trade restrictive than necessary because it is safe to import U.S. products meeting international standards, and India’s restrictions are not adapted to the characteristics of U.S. exporting regions.

This victory will help address barriers to the Indian market for U.S. farmers, including those in the U.S. poultry industry in particular, and also signals to other WTO Members that they must ensure that any avian influenza restrictions they impose are grounded in science, such as by taking into account the limited geographic impact from outbreaks, and are not simply a disguise for protectionism.

“I welcome this win, which will help us eliminate unjustified trade barriers so U.S. farmers can sell high quality U.S. agricultural products to customers around the world,” said U.S. Trade Representative Michael Froman.  “The Administration is fully committed to enforcing U.S. rights to ensure Americans benefit from all the opportunities the United States has negotiated under our trade agreements.  This enforcement action, and everything we do at USTR, is guided by our commitment to supporting American jobs, strengthening the middle class, and giving Americans a fair shot to compete and win in today’s global economy.”

“This decision affirms the importance of basing agricultural trade requirements on sound science,” said U.S. Secretary of Agriculture Tom Vilsack. “This is a major win for U.S. agriculture and, in particular, the U.S poultry industry.  Today, America's poultry producers are being challenged again by an outbreak of highly pathogenic avian influenza, and this decision serves to encourage USDA's efforts to maintain open markets for U.S. poultry based on international standards. A rules-based international trading system is critical to allow U.S. farmers and ranchers to compete on a level playing field worldwide.”

This enforcement win is further validation of the Administration’s strong record enforcing U.S. rights under our trade agreements.  Recent WTO victories include:

Since 2009, this Administration has brought 19 enforcement actions in the WTO, and won every single one decided thus far.

A copy of the Appellate Body’s report may be found here.

The U.S. poultry industry, which employs over 350,000 workers and consists of nearly 50,000 family farms – has been particularly affected by India’s restrictions.  The industry estimates that U.S. exports to India of just poultry meat alone could exceed $300 million a year once India’s restrictions are removed – and are likely to grow substantially in the future as India’s demand for high quality protein increases.  Exports are important to the health of this industry.  The United States exports 20 percent of its poultry meat production with U.S. exports for poultry meat, eggs, and other poultry products worth approximately $6.5 billion to over 136 countries in 2014. 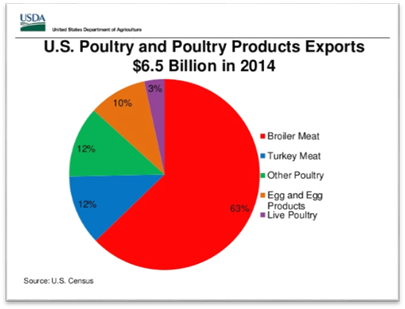 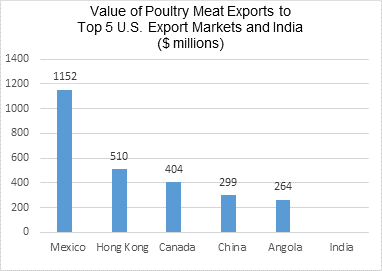