The following op-ed was originally posted to the Project Syndicate website. You may view the op-ed here. 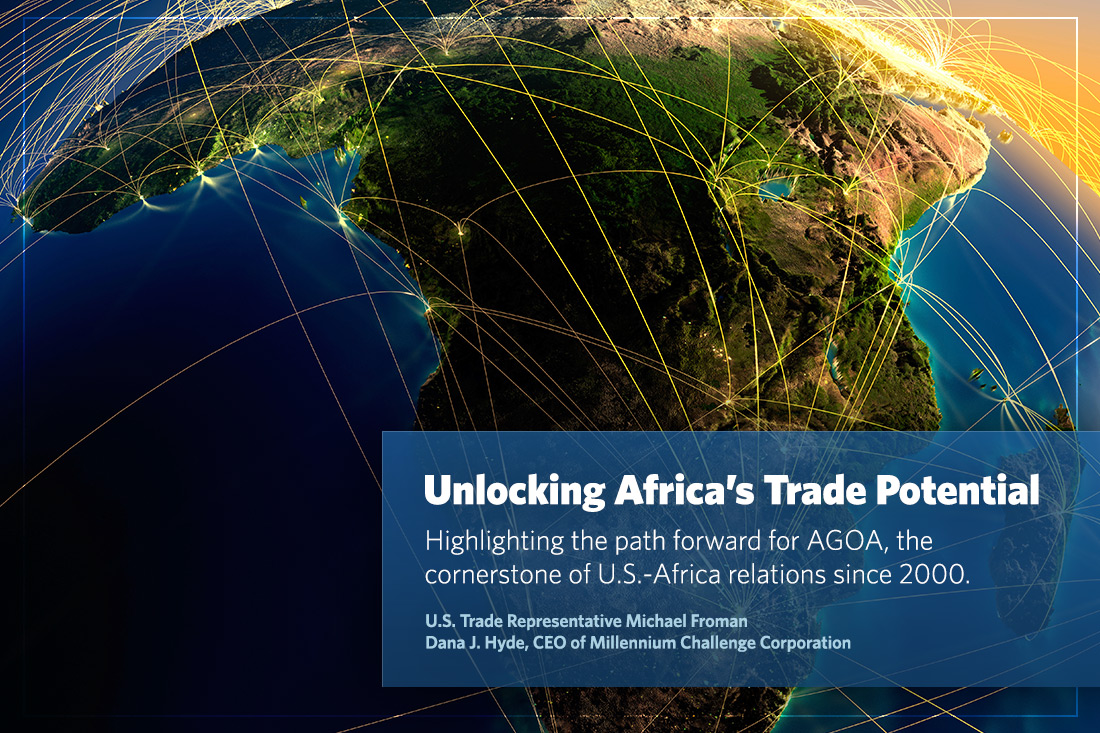 These trends will give African countries a more prominent role on the world stage, and provide new opportunities for people to better their lives. As African countries assume their new role, they want meaningful economic partnerships that deliver the sustainable, inclusive growth they seek. As US President Barack Obama said during his visit to Ethiopia last month, “Real economic partnerships have to be a good deal for Africa. They have to create jobs and capacity for Africans.”

By those criteria, the African Growth and Opportunity Act (AGOA) has been tremendously effective since its enactment in 2000. By removing tariffs on exports to the United States from 39 Sub-Saharan countries, it has stimulated growth, encouraged economic integration, and created opportunity where it otherwise might not have existed. Earlier this summer, the US Congress, recognizing these gains and underscoring the strength of America’s commitment to Africa, overwhelmingly approved legislation to reauthorize AGOA for another ten years.

To make the most of this extension – the longest in the program’s history – the US and its African partners need to start working toward a more comprehensive partnership. That journey begins by acknowledging that tariffs are no longer the biggest constraint on trade in Africa. Today, the chief impediments are supply-side constraints, which require well-designed strategies and capacity-building efforts so that AGOA’s members can take full advantage of the program’s benefits.

Making the most of AGOA will also require improvement in the infrastructure – physical and institutional – necessary for promoting investment and facilitating trade. The issues that need to be addressed include the lack of reliable, affordable electricity, high transportation costs, and weak and inefficient trade-related facilities.

Consider the challenges faced by Brazzaville, in Congo, and Kinshasa, in the neighboring Democratic Republic of Congo. These two cities, separated by the Congo River, are expected to grow to a combined total of nearly 20 million residents by 2025. But, because of poor infrastructure and inefficient customs procedures, only 1.1% of Congo’s imports come from its neighbor.

According to the World Bank, getting a container across the Congo River costs almost $4,500, and the total can top $10,000 once the cost of inland transportation is added. By contrast, moving an identical container with the same cargo from Malaysia to Singapore costs less than $1,000.

Africa needs to build its capacity to trade competitively in today’s global economy. That is why the Office of the US Trade Representative, the Millennium Challenge Corporation (MCC), USAID, and other US government agencies are advancing programs like Trade Africa, Power Africa, and Feed the Future to help the continent develop sustainable infrastructure and increase regional integration.

Consider MCC’s work in Benin. As one of the US agencies leading efforts to build trade capacity in Africa, MCC committed more than $180 million to upgrade the Port of Cotonou, which serves as a gateway for trade not only to Benin, but also to the landlocked countries of Burkina Faso, Mali, and Niger. MCC’s investment, which leveraged public and private funds, aimed to alleviate chronic freight bottlenecks in the port by doubling its capacity to import and export cargo.

During President Obama’s visit to Africa, MCC made a further commitment of $52 million to support a series of similar public-private partnerships that are expected to generate $750 million in investments in Africa. MCC could do even more to increase trade capacity and cross-border engagement if it had the authority to pursue regional investments. By investing in cross-border roads or power transmission, for example, MCC could help increase economic activity and promote regional integration.

Such efforts would help African and American exporters alike, including the 120,000 Americans whose jobs are supported by US exports to sub-Saharan Africa. That is why leaders in Congress from both parties are working to give MCC this much-needed authority.

Even as we consider how to make the most of AGOA’s historic renewal, we need to look beyond 2025 and imagine what a deeper, more mature economic partnership might entail. Of course, we will need to account for emerging economic realities both within and outside of Africa. Already, many African countries are forging more permanent, reciprocal relationships with other developed-country trading partners.

At the same time, the US is moving forward with next-generation trade agreements – the Trans-Pacific Partnership and the Transatlantic Trade and Investment Partnership – that will raise standards across both the Asia-Pacific region and the Atlantic and will have positive spillover effects in Africa. For example, the TPP will help combat illegal wildlife trafficking, including illegal trade in ivory from Africa. In other areas, including labor rights, these agreements could help make higher standards the global norm.

As President Obama made clear at the US-Africa Leaders’ Summit in Washington, DC, a year ago, the US is not new to Africa. We have been engaged in Africa for decades, not as a colonial power, but as a partner. And that partnership is based not on extracting resources from the region, but on unlocking growth for all. As representatives from across Africa gather in Libreville, Gabon, this week for this year’s AGOA Forum, we have an opportunity and an obligation to take that partnership to the next level.