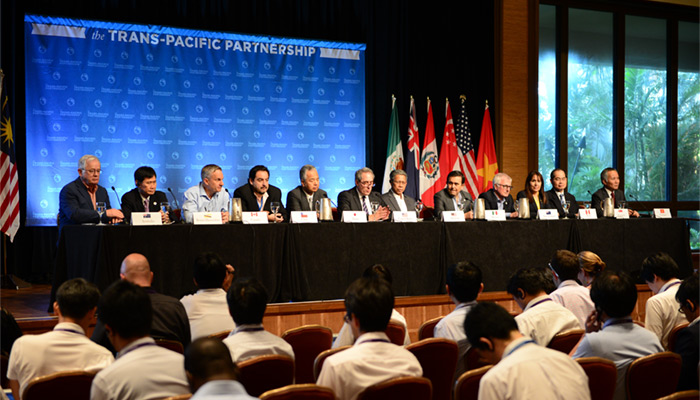 Update on the Trans-Pacific Partnership Negotiations

At the recent Trans-Pacific Partnership (TPP) ministerial in Maui, the 12 participant countries resolved a number of issues and built consensus for a path forward on those issues which remain unsettled. These developments will directly benefit American workers, farmers, and businesses of all sizes. Our negotiators made substantial progress on rules related to financial services, state-owned enterprises (SOEs), legal issues, and trade in industrial goods, agriculture, and textiles. Importantly, we also made substantial progress on intellectual property issues, where many previously-outstanding issues were resolved to the satisfaction of all parties after years of negotiations. We made substantial progress on market access for goods, services, investment, and government procurement. We also took significant steps toward completing an investment chapter that ensures that Americans do not face unfair discrimination when doing business abroad, while including safeguards that ensure our ability to continue to regulate in the U.S. public interest.

The progress made at the Ministerial meeting reflects our efforts to promote a values-based trade policy. Significant strides were made on an environment chapter that will require countries to provide critical environmental protections if they want to send their goods to the United States and will update NAFTA by putting fully-enforceable environmental obligations at the core of the agreement. We also made progress toward conclusion of groundbreaking and enforceable labor provisions that will require TPP partners to undertake specific steps to ensure that workers are accorded their most fundamental rights, as outlined by the International Labor Organization. In these and other areas in TPP, we have an opportunity to promote growth that is sustainable and inclusive.

Collectively, these steps are critical to “expanding the winner’s circle” by giving more Americans a fair shot in tomorrow’s global economy. By increasing U.S. exports and giving the United States a leading role in writing the rules of the road for tomorrow’s global economy, TPP will support more well-paying jobs here at home, enhance the economic prospects of middle-class American families, and strengthen U.S. national security.

President Obama has made clear that he will only accept an agreement that benefits middle-class families, supports jobs and opportunities, and furthers our national security interests in the region. Our negotiators’ work at the recent Ministerial meeting was focused on achieving the high bar that has been set by Congress through bipartisan Trade Promotion Authority and on delivering the ambitious, high-standard agreement that the President, Congress and the American people demand. These efforts built on prior work in a number of important areas, from e-commerce and telecommunications, to textiles, and other high-priority issues. Following last month’s productive meetings, this high-standard trade agreement is one step closer toward completion. Recognizing that in any trade negotiation, nothing is agreed to until everything is agreed to, we made significant progress at the Ministerial toward developing a package that we expect to be acceptable to all TPP countries, pending the resolution of a limited number of outstanding issues.

Ministers and negotiators are now in contact to formalize the progress made at the recent Ministerial meeting and find common ground toward concluding negotiations. At each step, our negotiators are guided by the ambitious objectives outlined in this report, as well as other important U.S. objectives including, but not limited to, the protection of health, safety, essential security, and consumer interests.

The United States ships nearly $2 billion in goods to TPP countries each day. In a highly competitive global marketplace, even small increases in a product’s cost due to tariffs or non-tariff barriers can mean the difference between success and failure for a business – and some of these cost increases are very large, with tariffs in TPP countries ranging up to 70 percent for American-made automobiles and even higher for some agricultural exports. That is why the United States is working to negotiate in TPP preferential access for the industrial goods, food and agriculture products, textiles, and many other products we export into the fastest-growing economies in the world.

Cutting the red-tape of trade, including by reducing costs and increasing customs efficiencies, will make it cheaper, easier, and faster for businesses to get their products to market. In TPP, we are looking to facilitate trade across the TPP region; support the deep integration of U.S. logistics, manufacturing, and other industries in regional supply chains; and reduce costs for U.S. business by removing onerous and opaque customs barriers.

Services industries account for four out of five U.S. jobs in the U.S., which is by far the world’s largest services exporter and maintains a services-trade surplus of $233 billion as of 2014.  Securing liberalized and fair access to foreign services markets will help U.S. service suppliers, both small and large, to do business in TPP markets – increasing revenues and supporting jobs at home.

With trade following investment, we are working to ensure that Americans doing business abroad are provided the same kind of opportunities in other markets that U.S. policy affords to domestic and foreign investors doing business within our borders. That is why we are seeking to include in TPP many of the investment obligations that have historically helped to support jobs and economic growth, as well as new provisions to take on emerging investment issues, while also including safeguards to ensure full rights to regulate in the public interest.

Digital Trade in Goods and Services and Cross-Border Data Flows

In the past five years, the number of Internet users worldwide has ballooned from two to three billion, and this number will continue to grow. The increase in Internet use creates significant economic potential, particularly for small businesses. The Obama Administration is working through TPP to ensure competitive access for Internet and telecommunications companies, and the huge swathe of the economy that relies on their services.  As the first trade agreement to address these issues in a comprehensive way, TPP will set digital trade rules-of-the-road, and is crucial to preserving the benefits of an open, global Internet for the future.

Strong and effective protection and enforcement of IP rights is critical to U.S. economic growth and American jobs.  Nearly 40 million American jobs are directly or indirectly attributable to “IP-intensive” industries. These jobs pay higher wages to their workers, and these industries drive approximately 60 percent of U.S. merchandise exports and a large share of services exports. In TPP, we are working to advance strong, state-of-the-art, and balanced rules that will protect and promote U.S. exports of IP-intensive products and services throughout the Asia-Pacific region for the benefit of producers and consumers of those goods and services in all TPP countries.

Increasing access to government procurement markets in TPP countries, which represent an estimated 10-15 percent of many countries’ economies, will unlock significant opportunities for U.S. businesses and workers.  At the same time, we intend TPP to be consistent with past agreements in preserving U.S. rights to maintain such policies as Buy American requirements and small business and other set-asides, as well as state and local procurement rights.

U.S. goals on competition policy and SOEs are grounded in long-standing principles of fair competition, consumer protection, and transparency.  The United States is seeking rules to prohibit anticompetitive business conduct, as well as fraudulent and deceptive commercial activities that harm consumers.  We are also pursuing pioneering rules to ensure that private sector businesses and workers are able to compete on fair terms with SOEs, especially when such SOEs receive significant government backing to engage in commercial activity.

At the recent ministerial meeting, negotiators made progress toward:

Ensuring respect for worker rights around the world is both a core value and a key to leveling the playing field for American workers and businesses. In TPP, the United States is seeking enforceable rules that protect the rights of freedom of association and collective bargaining; discourage trade in goods produced by forced labor, including forced child labor; establish mechanisms to monitor and address labor concerns; help to ensure acceptable conditions of work, in areas such as minimum wages and workplace health and safety; and upgrade NAFTA to ensure that enforceable labor standards are fully part of our trade relationships with Canada and Mexico.

Advancing environmental protection and conservation efforts across the Asia-Pacific region is a key priority for the United States in TPP, both as a core value and as a key to leveling the playing field for American workers and businesses.  In TPP, we are seeking strong and enforceable rules to protect the environment and require enforcement of domestic environmental laws; trailblazing, first-ever conservation proposals to address some of the region’s most urgent environmental challenges, such as wildlife trafficking, illegal logging, and overfishing; the first agreement to reduce fishery subsidies; and rules ensuring transparency and public participation.

Through TPP, we are seeking to make trade across the TPP region more seamless, including by improving the coherence of TPP regulatory systems, enhancing transparency in policy-making processes, and combatting corruption.  These “good government” reforms also play an important role in ensuring fairness for American workers and small businesses.

At the recent ministerial meeting, negotiators made progress toward:

We expect our TPP partners to abide by the rules and obligations within the agreement.  If disputes arise with respect to compliance, the Parties have recourse to an independent tribunal to determine whether a Party has failed to meet its obligations, and ultimately to allow suspension of benefits of the trade agreement if a Party fails to come into compliance.  Through the TPP dispute settlement mechanism, we are seeking to give the American public the confidence that the United States has the means to enforce the strong, high-standard obligations we aim to secure through this agreement.

The United States views development as a way to further strengthen the region and lay the groundwork for future economic opportunities by improving access to economic opportunity for women and low income individuals; incentivizing private-public partnerships in development activities; and designing sustainable models for economic growth. In addition, the United States sees trade capacity-building as critical to assist TPP developing countries such as Vietnam, Peru, Brunei, and others, in implementing the agreement and ensuring they can benefit from it. In TPP, we plan to include a chapter on cooperation and capacity building, and for the first time in any U.S. trade agreement a chapter dedicated specifically to development.