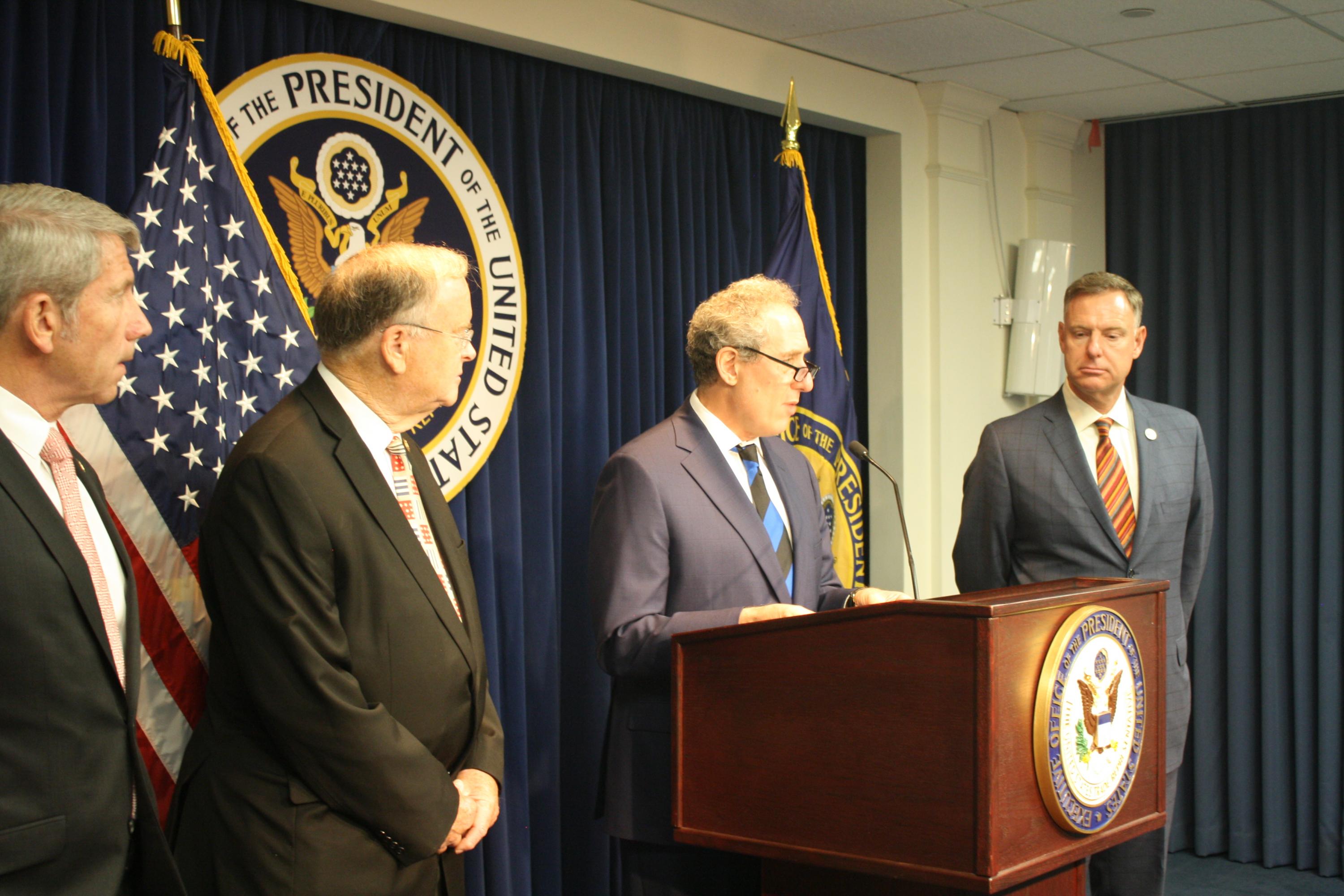 “Today we have signed an agreement with China to eliminate export subsidies that the United States challenged because they are prohibited under WTO rules. This is a win for Americans employed in seven diverse sectors that run the gamut from agriculture to textiles to medical products, who will benefit from a more level playing field on which to compete.  This agreement once again underscores that President Obama’s commitment to enforce our trade rights aggressively to secure real economic results for American workers, farmers, and businesses of all sizes and in every part of the country… “This agreement shows our dedication to ensuring that American workers and businesses have the opportunity to compete fairly, supporting high-quality U.S. jobs and strengthening the middle class.  It also demonstrates the resolve with which we will enforce the high standards negotiated in the Trans-Pacific Partnership, whether on labor, environment, intellectual property rights or other commercial issues.”

Following a dispute brought by the United States at the World Trade Organization (WTO), Ambassador Michael Froman announced that China has effectively terminated its Demonstration-Bases Common Service Platform” program, which provided export-contingent subsidies to Chinese enterprises across seven economic sectors and dozens of sub-sectors in over 179 industrial clusters. Termination of prohibited export subsidies under the “Demonstration Bases-Common Service Platform” Program will help level the playing field for American workers and businesses in the many affected sectors.

Below are reactions to the announcement:

Representative David Price (D-NC-04): “Today's announcement demonstrates that strong trade enforcement actions can effectively level the playing field for American businesses and workers. We must continue to be vigilant in monitoring China's unfair trade practices and in calling for WTO arbitration to end any violations of our international trade standards and agreements.” [Representative David Price, 4/14/2016]

Representative Sam Farr (D-CA-12): “Trade is crucial for the agriculture industry in my California district. Our growers play by the rules and we expect the same from our trade partners. This administration’s strong record of enforcing trade agreements and pushing for even higher standards in future deals ensures that everyone is playing on a level field.” [Representative Sam Farr, 4/14/2016]

Representative Rick Larsen (D-WA-2): “Today’s announcement that China will end its unfair export subsidies program sends a strong and important message that the U.S. will hold our trading partners accountable and enforce the trade agreements we have in place. If other countries want to trade with us, they must play by the rules or face the consequences. I am pleased USTR followed through on this case and is pushing to make sure our workers get a fair shot. Leveling the playing field is exactly why we have the WTO and rules of the road for international trade.” [Representative Rick Larsen, 4/14/2016]

Representative Henry Cuellar (D-TX-28): “This settlement helps level the playing field for American exports to China. Free trade is the backbone of a strong global economy, but it only works if everyone plays by the same rules. Making sure that China and all WTO members honor their agreements will encourage better market access through strong enforcement and accountability measures. This settlement demonstrates how our government needs to enforce the standards laid out in the Trans-Pacific Partnership and in all future trade agreements. We should count today's announcement as a victory for free trade.” [Representative Henry Cuellar, 4/14/2016]

Representative Suzan DelBene (D-WA-3): “China has illegally subsidized manufacturers and producers across seven economic sectors – several of which directly harm businesses and farms in Washington’s First District. I’m outraged by the unfair practices China has employed to manipulate markets and I will continue to fight for policies that support U.S. workers. We need strong rules and enforcement to ensure a level-playing field for U.S. businesses competing in the global market, which is why this ruling is so important.” [Representative Suzan DelBene, 4/14/2016]

Representative Scott Peters (D-CA-52): “America’s ability to compete and prosper in a global marketplace depends upon strong, enforceable rules,”  “Businesses that play by the rules need to know the United States will not tolerate unfair trade practices. I applaud the work of Ambassador Froman and USTR to bring about this successful enforcement action for U.S. workers and businesses both small and large, including innovators in San Diego. When the United States leads on trade, we can better set and enforce the rules and create a more level playing field that allows America’s innovators to succeed.” [Representative Scott Peters, 4/14/2016]

Rick Helfenbein, President & CEO, American Apparel & Footwear Association: "AAFA is pleased to see that the United States and China were able to resolve the long-standing dispute over China's export subsidies that are not consistent with international trade obligations and a balanced business model. AAFA members depend on global adherence to these international trade commitments to compete and create US trade-based jobs. Thanks to Ambassador Froman and the team at USTR for enforcing these commitments." [American Apparel & Footwear Association, 4/14/2016]

Augustine Tantillo, President & CEO, National Council of Textile Organizations: “We thank the Obama administration for working diligently to construct an arrangement to eliminate these subsidies which directly damage U.S. manufacturing jobs, output and investment. There is no doubt that China’s rise to become the world’s largest exporter of textile and apparel products has been aided by a pervasive series of illegal state-sponsored subsidies. These subsidies are clearly inconsistent with the rules of the World Trade Organization, and they are unfair to domestic textile manufacturers and the hundreds of thousands of U.S. workers they employ. Our companies must play by free-market rules, and it is time that Chinese textile manufacturers do the same” [National Council of Textile Organization, 4/14/2016]

Linda Dempsey, Vice President of International Economic Affairs for the National Association of Manufacturers: “Manufacturers welcome the U.S.-China agreement announced today that terminates a substantial Chinese export subsidy program, which has sought to advantage a wide range of Chinese manufacturing and other industries.” [US, China sign deal to end export subsidies program, 4/14/2016]

Julia Hughes, President & CEO, U.S. Fashion Industry Association: “We are pleased that the U.S. and China have reached a settlement that resolves the threat of a dispute settlement case based on these export subsidies. This shows that the U.S. and China have a positive working relationship to solve trade disputes and live up to our WTO commitments.” [China to Terminate Export Subsidies on Textiles, Apparel, Footwear, 4/14/2016]

Reuters: “China has agreed to scrap controversial export subsidies on a range of products from metals to agriculture and textiles, the U.S. Trade Representative said on Thursday. In a deal coinciding with global economic meetings in Washington, the trade representative's office said China had agreed to end a program known as its ‘demonstration bases-common service platform’ in which it provides export subsidies to Chinese companies in seven economic sectors. The agreement is a step by Beijing to reduce trade frictions with the United States that range from steel and agricultural products to technology and banking.” [U.S. says China to end export subsidies in seven sectors, 4/14/2016]

Wall Street Journal: “China has ended a complicated incentive program that effectively subsidized its exports, a year after the U.S. filed a challenge with the World Trade Organization, U.S. officials said…The Obama administration has sought to boost enforcement of alleged trade violations in part to rally support for new trade agreements, including the Trans-Pacific Partnership, concluded last year with Japan and 10 other countries around the Pacific.” [China Halts Export-Subsidy Program, U.S. Says, 4/14/2016]

The Hill: “The United States and China have signed an agreement that eliminates a significant subsidies program used by Beijing to bolster its exports across several sectors. U.S. Trade Representative Michael Froman said the deal will not only help U.S. workers but highlights the Obama administration’s commitment to challenging violations of the World Trade Organization's international trade rules. Froman called the deal a win ‘for Americans employed in seven diverse sectors that run the gamut from agriculture to textiles to medical products, who will benefit from a more level playing field on which to compete.’” [US, China sign deal to end export subsidies program, 4/14/2016]

Sourcing Journal: “On Thursday, the Office of the U.S. Trade Representative (USTR) said China signed an agreement with the U.S. to end export subsidies, which—to borrow from the government’s favorite trade-related buzzphrase—will level the playing field for American makers. Under its Demonstration Bases-Common Service Platform program, China was encouraging exports over domestic sales and providing export subsidies like cash grants and free or discounted services to companies in seven sectors, including textiles, apparel and footwear, and advanced materials and metals.” [China Agrees to Eliminate Export Subsidies, 4/14/2016]