A legacy of creating jobs, promoting growth, and strengthening the middle class 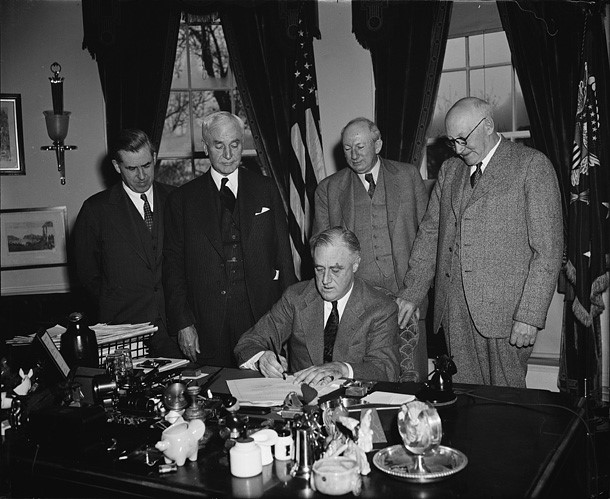 Today marks the 80th anniversary of the Reciprocal Trade Agreements Act (RTAA), a new approach to trade policy passed by the New Deal Congress and signed into law by President Franklin D. Roosevelt.  The RTAA was the first time Congress and a President worked together to enact trade negotiating authority to help pass new trade agreements that would increase exports and support new job creation.  Through the RTAA, Congress set the framework for international trade negotiations and empowered the President to exert American leadership in the international trading system.

The Reciprocal Trade Agreements Act was signed into law on June 12, 1934 as part of the Roosevelt Administration’s efforts to pull America out of the Great Depression.  The RTAA served as an integral step in America’s transition from economic crisis to global leadership.  FDR believed that a complete and permanent recovery depended on strengthened international trade to increase domestic growth and demand. To secure our country’s space in the global economy, the American President and Congress needed to work together to negotiate trade agreements to cut tariffs on goods and increase U.S. exports. Increased international trade boosted the growth-promotion aspects of the New Deal’s domestic programs, and the successful enactment of the RTAA resulted in the conclusion of 19 new trade agreements between 1934 and 1939, strong growth in U.S. exports, and the recovery of the American economy.

Eighty years later, the tradition of the Reciprocal Trade Agreements Act continues in the form of modern Trade Promotion Authority (TPA).  President Obama, like President Roosevelt, has made trade policy a central part of his economic strategy to create jobs, promote growth, and strengthen the middle class. In 2013, U.S. exports increased to a record high of $2.3 trillion, an increase that is responsible for a third of America’s total economic growth. Moreover, every additional $1 billion in exports supported roughly 5,600 U.S. jobs, which on average pay 13-18% more than non-export related jobs. Trade Promotion Authority is necessary for building on these gains and extending American economic leadership into the 21st Century.

Trade Promotion Authority is about unlocking opportunity for domestic workers, in the same way Roosevelt’s RTAA aided domestic job creation through trade in the New Deal programs. TPA is a vital part of trade negotiations because it allows Congress to set the terms of trade negotiations, congressional consultations during negotiations, and the legislative procedures for voting on agreements.

Though the world has changed dramatically since FDR enacted the Reciprocal Trade Agreements Act, the basic promise of trade remains the same. Done right, trade policy gives American workers the chance to compete on a level playing field, and under TPA, Congress and the Administration work together to guide trade with global partners by setting goals and standards that represent American interests and values.