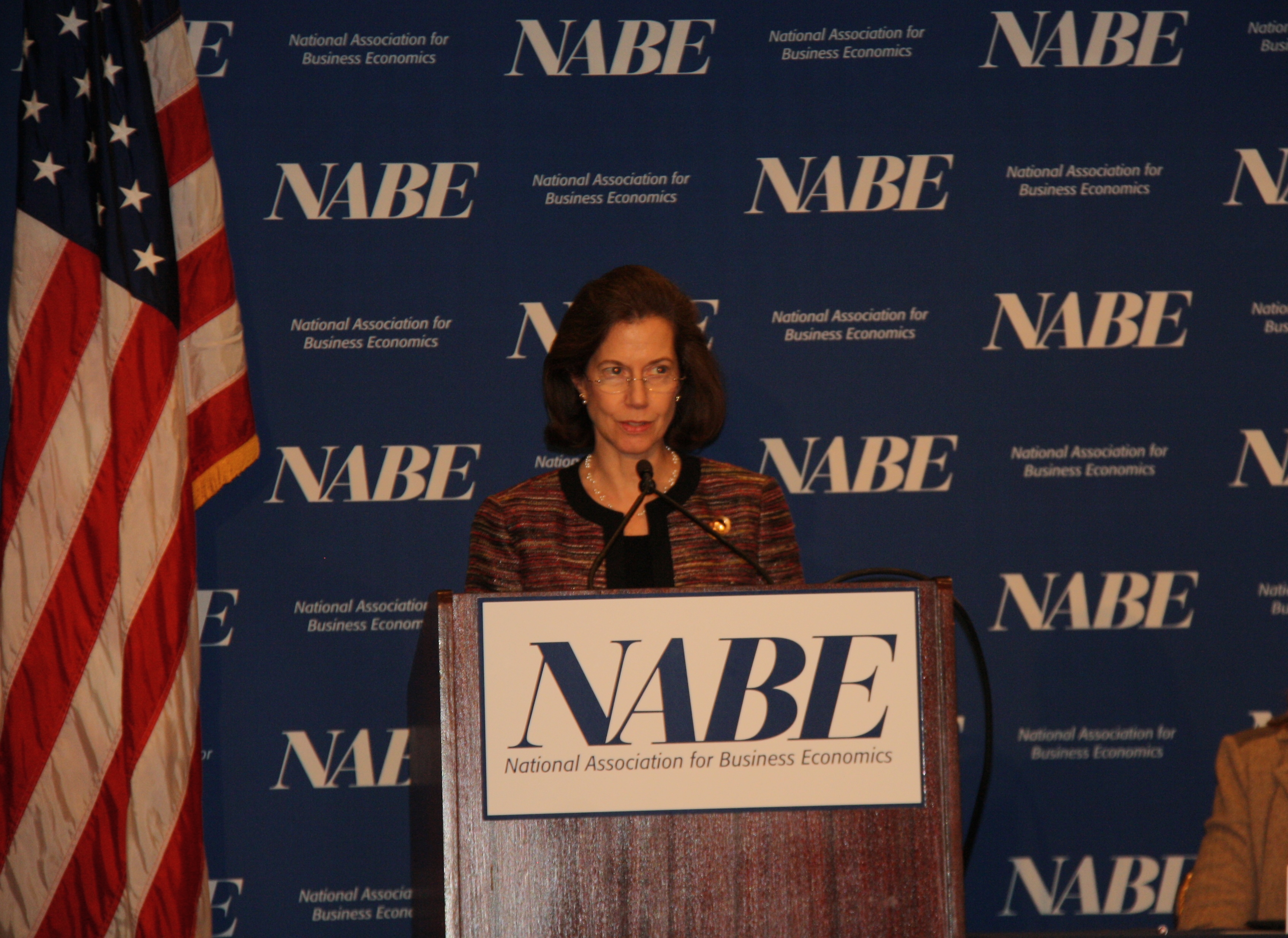 "Thanks for that introduction Constance.  I have to say, it’s a bit intimidating being the only lawyer in a room full of economists.  In Washington, it’s not often that we lawyers are outnumbered.

"As strategists and practitioners, all of you are familiar with the headline economic numbers, but they are worth a quick review, as they provide some context for what this Administration is working to accomplish through its trade policy.

-          Six hundred thousand of these jobs were in the manufacturing sector, the first such increase since the 1990’s.

-          Consumer spending and real business investment are up significantly.

"While we still quite aren’t where we want to be, these achievements aren’t taking place in a vacuum.  The President’s agenda is driving economic and jobs growth, and trade is playing an important role in that effort.

"Despite persistent global economic headwinds, U.S. exports reached an all-time high in 2012, and again in 2013.  And over the last five years, exports have increased 50 percent, added $700 billion to our economic output, and accounted for one-third of our GDP growth.

"Expanded exports translate into more jobs… and higher paying jobs.  Every billion dollars of goods and services exports supports between 5,400 and 5,900 jobs.  And those jobs pay on average between 13 and 18 percent more.

"We believe we can do more on both growth and jobs, which is why the President has laid out the most aggressive trade agenda in more than a generation.  In just the past 12 months, the United States made substantial progress towards concluding a landmark Trans-Pacific trade agreement, launched a transatlantic negotiation with the EU and a services negotiation at the WTO, and secured the first major multilateral agreement, which was on trade facilitation, in the two-decade history of the WTO.

"Each of these agreements will help make us more competitive, boost output and support jobs here at home. They will help level the playing field for our businesses and workers, and contribute to America’s economic bottom line.

"They’re also a powerful tool for disseminating American values throughout the global marketplace, including rule of law, competition, transparency, accountability, and respect for workers’ rights and the environment.

"I want to leave plenty of time for a robust “q and a” session, so I’ll just briefly highlight these four agreements, which help make up a much broader trade agenda.

"U.S. Trade Representative Michael Froman just wrapped up meetings with trade ministers from 11 other countries in Singapore, where they made progress on an ambitious, next-generation trade and investment partnership that spans the Asia-Pacific and that reflects U.S. economic priorities and values.

"The TPP will strengthen U.S. ties with a market of nearly 500 million people that represents nearly 40 percent of global GDP and has a growing middle class.  According to the Peterson Institute, TPP would generate an additional $124 billion in U.S. exports.  And that’s just with our current 11 partners.

"I called it a “next-generation” agreement because TPP is raising the bar over past agreements, for example, by pursuing the highest labor and environmental standards, and by strengthening IPR provisions to encourage innovation.

"Second, TPP is taking on new issues that have never before been addressed in any trade agreement, such as dealing with unfair competition from state-owned enterprises, easing restrictions on the free flow of data and information, promoting the development of regional supply chains, enhancing transparency in regulatory practices, and addressing the unique problems faced by small- and medium sized enterprises that form the backbone of the U.S. economy and economies around the world.

"Our vision for TPP is to create a high-standard and comprehensive regional trade agreement that can serve as a roadmap for establishing open markets across the Asia-Pacific.  After four years of negotiations, we’re now in the endgame.

"Turning East, last year we launched negotiations on an ambitious, comprehensive agreement with the European Union.  Although the U.S.-EU economic relationship already supports $1 trillion in trade, $4 trillion in investment, and 13 million jobs, we believe there is still plenty of room to grow.

"A successful agreement with Europe will accomplish three main objectives: (i) expand market access by removing tariffs and liberalizing services trade and cross-border investment; (ii) make U.S. and EU regulations and standards more compatible, both generally and in specific sectors, thereby reducing unnecessary costs and administrative delays while maintaining high levels of health, safety, and environmental protection; and (iii) develop rules that strengthen the multilateral trading system and address global issues of mutual concern in a way that can become a model for other trading partners.

"Because U.S. and EU tariffs are already relatively low, the second objective, greater regulatory compatibility, offers the greatest potential for gain.  We’re under no illusion that this will be easy.  Our differences are long-standing and deeply engrained.  But this negotiation offers us a chance to conduct a joint examination of our two approaches and the ways they can be made to work together better.  Both sides will benefit if are able to eliminate the burden of having to meet two different requirements with a single regulatory objective.

"We’re steadily working our way through our differences and had a productive stocktaking last week.  In less than two weeks, we’ll have another opportunity to make tangible progress, when our teams gather for a fourth negotiating round in Brussels.

"Last year, we also launched negotiations with nearly four dozen partners on a Trade in Services Agreement (TISA), which will promote fair and open competition across the full spectrum of service sectors.

"The United States has much to gain by expanding trade in services.  We are the world’s largest services trader and our trade surplus in services grew to over $200 billion in 2012.  However, a recent study published by the Peterson Institute –perhaps Jeff can talk a bit more about this – estimates that exports of tradable business services could be five times larger, a difference of $800 billion, if services achieved the same export potential as manufactured goods globally.

"So what is preventing the United States from increasing exports when our services companies are so much more advanced?  One of the biggest reasons is the patchwork of discriminatory laws and regulations that other countries put in place to curb competition.  Let me give you just two examples of what I’m talking about:

-          In some cases, companies that rely on cloud-based delivery cannot operate in many countries unless they agree to first establish data centers there.

-          In others, foreign countries adopt measures that stymie online distribution for U.S. products, including some of the world’s most popular entertainment and software.

"So TISA negotiations provide a means of addressing of these and other types of barriers.  When we conclude TISA, we will have liberalized trade with two-thirds of the global services market.

"In addition to our Pacific, Atlantic partnerships and TISA negotiations, we are pushing ahead on the multilateral front as well.

"In December, the United States led efforts at the World Trade Organization (WTO) to reach the first new multilateral trade agreement since the organization’s creation in 1995.  The Trade Facilitation Agreement among the WTO’s 160 Members will help to open new markets for U.S. exporters by reducing customs barriers worldwide.

"We pursued this agreement because our exporters are more willing to explore foreign markets when they can calculate with certainty what they’ll pay in customs duties and fees.   When they are confident that their agricultural products won’t perish at a port because of unnecessary red-tape.  And when they don’t have to pay additional warehousing costs because of paperwork delays at the border.

"The Trade Facilitation Agreement will address these types of problems by providing greater predictability, simplicity and uniformity in customs and other border procedures.

"Small businesses will be among the biggest winners, since they encounter the greatest difficulties in navigating the current system.  By some estimates, the global economic value of the new WTO deal could be worth nearly $1 trillion.

"Let me close with a few words on Trade Promotion Authority (TPA).  TPA is the formal grant of trade negotiating authority from Congress to the Executive Branch.

"Under TPA, Congress gives detailed instructions to the Administration and defines U.S. negotiating objectives and priorities for trade agreements.  Congress also sets the consultation and notification requirements and defines its own role in developing trade policy throughout the process.  And Congress retains the ultimate authority to decide whether the United States will join any trade agreement.

"Without TPA, the United States is at a disadvantage while other countries are actively negotiating trade agreements.  Since TPA was last renewed in 2002, hundreds of trade agreements between other countries have entered into force and several more are currently being negotiated.  While these agreements are not the high-standard, comprehensive trade agreements the U.S. negotiates, they do offer foreign companies better and cheaper access to these markets, which hurts U.S. workers and farmers.

"The question is, who will set the rules?  Will we, or will we let others do so, not necessarily in a way that is consistent with our interests and values?  The choice should be clear.