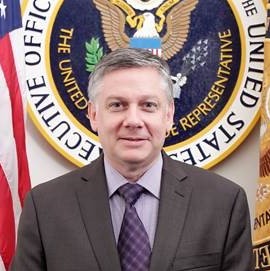 Lewis Karesh was named Assistant U.S. Trade Representative for Labor Affairs in August 2005. In this capacity, he oversees trade and labor issues for USTR, including negotiation of labor provisions in multilateral, regional, and bilateral free trade agreements, monitoring and enforcement of those labor provisions, countries' adherence to worker rights provisions of U.S. trade preference programs, and development of U.S. positions on the relationship between trade and labor in international fora, including the International Labor Organization, World Trade Organization, Organization for Economic Cooperation and Development, and Asia-Pacific Economic Cooperation.

Mr. Karesh began his work on trade and labor issues in 1994 with the negotiation and implementation of the North American Agreement on Labor Cooperation (the labor supplemental agreement to the North American Free Trade Agreement). From 1996 to 2005, Mr. Karesh served in the U.S. Department of Labor’s Bureau of International Labor Affairs as Deputy Director and then Director of the office responsible for administering U.S. obligations under the North American Agreement on Labor Cooperation and the labor chapters of bilateral and regional free trade agreements. During his tenure, Mr. Karesh served as the Department’s lead representative on U.S. labor and dispute settlement negotiating teams for free trade agreements with Chile, Singapore, Australia, Central America, Morocco, and Bahrain.

From 1988 to 1996, Mr. Karesh worked as an attorney in the Department of Labor's Office of the Solicitor serving as legal counsel on a variety of domestic labor matters, including the Labor-Management Reporting and Disclosure Act and the Veterans’ Reemployment Rights Act, and international labor matters, including the North American Free Trade Agreement, the World Trade Organization, and the International Labor Organization.